Weather resistant, fade resistant, high opacity, fast drying, and perfect for daily professional use indoors and out. The finest high pigment water-based Acrylic Paint you can buy! This water based paint dries matte. It can however, be clear coated to create a glossy finish. This paint is for use on outdoor murals, window splash, canvas work, airbrush, leather, etc.

Includes all 48 normal colours of Alphakrylik. Doesn’t include metallic or electroshock colours.

Alphakrylik is a versatile paint for artists of many mediums. It is a water based acrylic paint that cleans up with soap and water. It has super intense pigment, and durability. Alphakrylik can be used by fine artists, who paint on canvas, window splash artists who paint on windows, garment and shoe artists, as well as sign painters. It is truly a professional artist’s paint but due to the easy clean up, can be used by anyone. Alphakrylik lasts for years on windows, signs and canvas.

Alphakrylik is scientifically formulated, mixed, and bottled in Detroit, USA by Alpha 6 Corporation. Alphakrylik is formulated with ground pigments rather than dyes in order to be more opaque to ensure single stroke coverage allowing for faster drying times, a higher opacity out of the bottle, better weather resistance outdoors.

Our reviews on Trustpilot 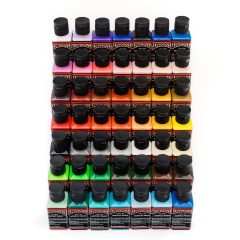